A little while back the Worshipful Company of Goldsmiths opened their new Goldsmiths centre; a project that has taken Peter Taylor many years to bring to life.

I was lucky enough to be selected to exhibit in the opening exhibition and I took a couple of quick snaps of my work whilst I was at the private view. There were a few famous faces amongst the guests such as Stephen Webster and William Cheshire and I caught up with past tutor Maria Hanson.

I was very impressed with the new centre and its intentions; there will be a range of people working within the building from well established businesses, starter studios, the post graduate course and apprentices. The idea being that everyone will interact and work together.

Its a lovely idea and I hope it works well! http://www.goldsmiths-centre.org/

Well we are back from Treasure; it was a great experience and I think our stand turned out well – although we maybe could have done with a bigger room! The show was hugely varied but one of my favourites from the Design Gallery was Niza Huang.

Niza creates jewellery with petroleum captured inside – how she keeps it in there is a closely guarded secret I’m sure! But the idea is fascinating and I think resulting the pieces are beautiful and intriguing. http://www.nizahuang.com/

So now I am just about to take this collection to New Designers where I will be exhibiting in the One Year On section which starts next Wednesday the 27th of June. I will also hopefully be unveiling my new collection!

The Olympics… it finally arrived and we hopped on the train down to London for the day. We arrived early and before we headed over to the Olympic Park we stopped at the Westfield shopping centre as I had heard about the Liberty pop up shop. 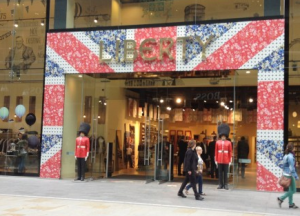 The Westfield was very patriotic with British flags everywhere and even a mini with a flag painted on the roof on the side of a building. As we came to Liberty’s we found part of the Australian team having pictures outside with the plastic beefeater guards; they were clutching onto their ‘portable bar’ (beer) full of laughter and we couldn’t help feel our day would have been very fun if we had tried to tag along with them.

The park itself was vast and felt oddly like a theme park – especially as the viewing tower looks a bit like a helter skelter to me! It was super windy but no rain, a little sun and there was a lovely feeling of anticipation and excitement about the people.

Around the park they had planted some of the prettiest flowers.

We had tickets for the swimming and had been watching it each evening on the tv seeing most of our swimmers only coming close but were still hopeful for a British medal whilst we were there. We had our flag ready – which turned out to be back to front for about half the time we were waving it – hopefully that wasn’t bad luck… But no British medal – the American and Chinese teams were just too good. We watched Phelps scoop up his 20th medal and we headed home able to say ‘we were there’.

I have just got back from New Designers where I exhibited in the One Year On Section. I had a great show and now my year ahead is now looking even more exciting! I also met some brilliant people and the other exhibitors work was amazing.

Next to my stand was Ruth Laird – a jeweller who creates objects of great detail and careful consideration. Most of her work moves – swivels and swaps round to be worn in different ways. http://ruthlaird.com/

Emma Louise Payne – who’s pottery has been designed to move according to the level of fullness! Cups rest on their handles when empty but when filled they gently rise into an up-right position. http://www.emmalouisepayne.com/Home.html

This year the worshipful company of Goldsmiths – who sponsor the Precious metal section – had a wall with images of work from makers that have been supported by the company in some way over the past year.

I came across these images when I was doing my degree and I found that they drew me in with their air of mystery and ambiguity. I liked how the presence could be interpreted in so many ways.

The works are from collaboration between Ujin Lee and Tom Edwards and they are simply called ‘Dust series’.

I recently ran a wire workshop at Bilston Craft Gallery for kids. They were all super creative; I had a fab day – and I hope they did too! Here are some of the results of their hard work.

To visit Bilston Craft Gallery or see what’s on: http://www.wolverhamptonart.org.uk/visit/bilston/